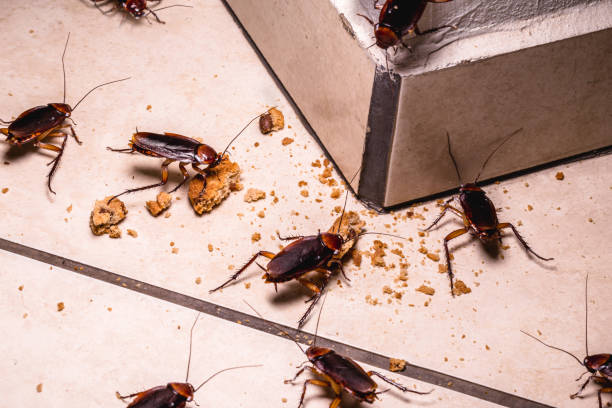 There's a banishment spell in the Egyptian Book of the Dead that says, oh vile cockroach, farewell to me. 3000 years later, we're still trying to get rid of cockroaches, but it seems they can withstand poison traps, easterly brandishes, and slippers. Why are cockroaches so hard to kill?
There are nearly 5000 species of cockroaches. 99% of them live in a range of habitats where they play important ecological roles by recycling dead or decaying organic matter and nourishing other animals. But a couple of dozen species have adapted to live in close association with humans. German and American cockroaches are among the most common and they owe their resilience to a combination of physical and chemical adaptations. When it comes to old-fashioned removal methods, they're troublingly tenacious, and the American cockroach's sensory hairs or structures pick up subtle air currents and rapidly send signals to its central nervous system. The roach can then turn and sprint away within a few milliseconds, and it's among the fastest invertebrates ever recorded, reaching speeds of up to 50 body lengths per second. This would be the human equivalent of running more than 300 kilometres per hour. And finding a hiding place is no problem with its flattened, flexible body and the American cockroach can squeeze into spaces less than a quarter of its height. Even if we do have to hit it can withstand compressive forces of up to 900 times its own weight by distributing the impact along its body and the cockroaches. Toughness doesn't end there. Cockroaches can eat a variety of organic matter including hair, dead skin, adhesives, and paper. This is made possible by an expansive set of digestive enzymes. Cockroaches are able to thrive even in nutrient-poor environments. Roaches often eat decaying foods that are low in nitrogen and essential component of DNA and proteins. But they survive by storing nitrogen-containing wastes in their bodies and having a resident group of bacteria recycle the nitrogen into useful molecules for them.
Meanwhile, German cockroaches will eat their own poop vomit and dead or dying colony members without hesitation. The American cockroaches will frolic in sewers consuming excrement and toting microbes like Staphylococcus aureus and E. Coli.
But they'll rarely suffer any consequences. This is because they're equipped with genes that provide immunity against numerous pathogens. These genes are often duplicated many times over. So when infected the cockroaches immune system efficiently unleashes many antimicrobial molecules. Cockroaches also have a slew of defences against pesticides. When a non-resistant Roach walks on a surface that's been sprayed with a pyrethroid insecticide for example, the results will likely be fatal. Once absorbed, the chemical binds to sodium channel proteins which help propagate nerve impulses. The pyrethroid keeps the sodium channels open, so the nerves fire repeatedly and soon the cockroach dies. But if a resistant Roach is exposed to hyperthyroidism, it'll be just fine. Genetic mutations have given them sodium channels that the pyrethroids can't find it to the cockroach also produces more detoxification enzymes, which render the pesticide harmless in the cockroach simply excretes it as a waste. Because German cockroaches reproduce especially quickly, populations may evolve resistance to a new pesticide within months. So far, they're already resistant to 43 different chemicals. But contrary to popular belief, cockroaches would probably not survive a nuclear apocalypse. Compared with other insects. Cockroaches are only mildly tolerant to radiation. They would die near the sights of nuclear explosions. And would still be severely compromised miles away. Moreover, disasters that threaten humanity also jeopardize the habitats and buffets we provide for roaches. Perhaps the only way to beat them is through mutual destruction. Or maybe cockroaches would find even more surprising ways to thrive long after we're gone. Cockroaches are curious creatures.

Comments on Cockroaches are impossible to eradicate. Here's why!