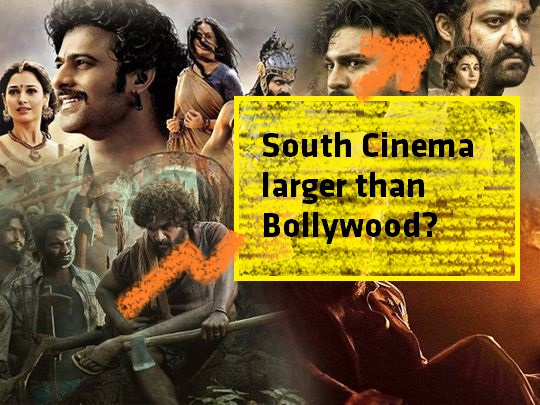 Movies from the south have made it to the north of India, but Hindi movies aren't doing as well down south.

With the post-pandemic era, South Indian movies, especially Telugu movies, have cemented their national presence with a bang. There will be more southern movies attempting to achieve this feat in the future. Bahubali set the trend, then Bahubhali 2, Saaho, Pushpa, and now RRR.

The Karnataka movie industry has also tasted blood with KGF 1 and 2 and to a certain extent. Tamil films have also tried making this transition with 2.0. It just goes to show that in the last few years, every actor, director, and production house in the south has been trying to cross the rubicon to reach a larger audience.

It's pretty clear what's going on here, every regional movie is aware that Rs 1,000 crore is up for grabs at the box office. Every movie from the southern stable wants to grab it. There's no doubt that a lot of these movies won't make that transition, but the majority of them will try because the cost vs benefit ratio is all in their favor. The distribution and marketing cost is minimal compared to the rewards they can get from their movie, which in turn spikes their satellite and digital rights.

Here's where Hindi movies and regional movies stand. Hindi movies have to figure out how to expand their market, especially in south India, which has half the screens in India. It's because the highest collection for a Hindi movie was Rs 375 crore, which isn't much in any of the southern markets. This is the Achilles' heel for Hindi movies since they will have to come up with options to boost their box office numbers in southern markets. Southern movies have made a smooth transition to the north of India, but the same cannot be said of Hindi movies making a dent in the south.

Though Bollywood is taking steps by getting national-level actors to work with regional directors, it will have to double down. If they want a loyal audience, they'll have to do more. Keep in mind that box office collections also impact ancillary rights, like satellite and digital. If the Hindi box office starts plateauing, this could go south too.

All this comes down to a burning ambition and hunger to grow combined with risk management commensurate to reward ratio from a financial perspective. In the Indian market, which releases the most movies and has the lowest screen density per million people, South has figured out how to do this math well, and the release window is going to get even more competitive, and South has a great head start.

Comments on Here is why south movies have been outperforming Bollywood