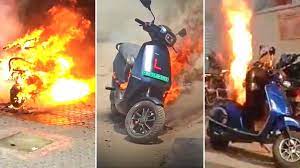 EVs are considered the future of mobility since they are a way to reduce fossil fuel dependency. And even though India is relatively new to this segment, it is on track to become one of the leading markets by 2030.

In India, the EV market will be worth US$206 billion by 2030, according to independent studies. It is estimated that this market will be driven mainly by two-wheelers. Despite the country's ambitious move towards an electric future, the two-wheeled electric vehicle sector is experiencing a severe crisis.

Over the past month several fires have raised serious questions about the safety of electric vehicle passengers. On Tuesday April 19, a man lost his life after the removable battery of his electric scooter exploded at his house.

Why are electric scooters in India catching fire?

To understand the problem. Let's first look at how batteries work and the variables involved. From smartphones to laptops to electric cars, lithium-ion (Li-ion) batteries are the most widely used. A Li-ion battery consists of an anode, a cathode, a separator, an electrolyte and two current collectors. The electrolyte carries the positively charged lithium ions from the anode to the cathode and vice versa, creating a charge. The main advantages of a Li-ion battery compared to other types of batteries are its lightness, high energy density, durability and recharging capacity. However, one of the biggest advantages of Li-ion batteries - their high energy density - can also be a potential reason for their loss. Fires have been caused by a failure of the battery's management of its components. Most often it is due to a short circuit. The main causes of fire are: Cell quality, battery design (how cells are connected and packaged), and Battery Management System (BMS) issues (managing cells by detection and software intelligence).

With the growing market demand, manufacturers are not spending enough time designing and testing products, and complying with government standards. Lack of time and rush to bring batteries to market results in poor cell quality, poor battery design and a poor battery management system. This is because cells are not managed properly with adequate software intelligence. Due to the escalating fires caused by electric two-wheelers, the government took action. The Ministry of Road Transport and Highways ordered an investigation into the vehicles that suddenly caught fire and asked the Center for Fire Explosive and Environment Safety (CFEES) to carry out investigations. Union Minister Nitin Gadkari also announced that any electric vehicle company that neglects the safety of its customers will be heavily penalised. He also gave the order to recall faulty electric vehicles. The two-wheeled EV market in India has grown exponentially over the past year with sales

And with India's vision of turning 80% of two-wheeler sales into electric vehicles by 2030, the problem of explosive batteries needs to be addressed and rectified immediately.